Telecommuting on the Chopping Block

Is axing the telecommuting perk a new workplace trend?

Reddit, the member-based entertainment, social networking and news website, is the latest company to end its telecommuting program, announcing in October 2014 that employees who work remotely or at offices in Salt Lake City and New York City must relocate to the company’s San Francisco headquarters.

In 2013, Yahoo, Best Buy and Hewlett-Packard either ended or altered their teleworking policies, and in each case, company leaders argued that having workers in the office fostered better communication and collaboration.

Matt Brosseau, chief technology officer and head recruiter at Instant Alliance, an HR staffing and consulting firm, said he believes work-at-home policies at other companies may be in jeopardy, especially for companies that are struggling to compete or turn a profit.

“I think you’re going to see more companies trying to centralize … as opposed to having [employees] scattered to the four winds,” he said. “There’s starting to be a pattern and it seems to be in organizations that … are looking for ways to regain market share. Any organization that needs to increase productivity and push out new products rapidly is going to start looking for solutions to bolster its numbers, and one of the first things they’ll think is, ‘How can you collaborate and get things done if half your team isn’t even in the office?’ ” 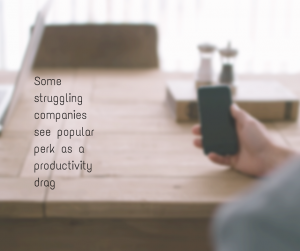 Is telecommuting a productivity drag?

Ellen Galinsky, president of the Families and Work Institute, says that if anything, the trend is moving in the opposite direction. In 2008, 50 percent of employers said they allowed some employees to work at home occasionally, compared with 67 percent today, according to the 2014 National Study of Employers, which is published by Galinsky’s institute and the Society for Human Resource Management. In 2008, 23 percent of employers said they let some employees work at home on a regular basis, compared with 38 percent today.

“The reason I think telecommuting is increasing is real estate,” Galinsky said. “Space is expensive. It’s a controllable cost.”

Telecommuting is a popular workplace perk across several industries. Companies that back teleworking say it helps them cut costs, produces rested and content workers, and gives companies an edge when luring talented applicants.

As for employees, they’re increasingly demanding flexible work arrangements for a few reasons: There’s been a significant rise in dual-earner couples, with men and women reporting an increase in work-family conflicts; the number of employees providing care to children or aging parents is growing dramatically; and as the workforce ages, senior employees with valuable institutional knowledge want flexible options.

“Any time a company makes an ultimatum with employees … you could see a significant uptick in attrition,” he said. “And any time you strip benefits away from a worker, that employee is going to have a hit to their morale.”

One of Yahoo CEO Marissa Mayer’s reasons for ending telecommuting was that remote employees weren’t checking in frequently enough through Yahoo’s virtual private network, which allows employees to securely log into the company’s network to do work. A Yahoo memo to employees insisted that “speed and quality are often sacrificed when we work from home.”

There may be support for that reasoning. The Washington Post reported that an internal probe of the U.S. Patent and Trademark Office’s award-winning telecommuting program found that employees lied about the hours they worked. And a 2012 Citrix survey found that 43 percent of workers said they’d watched TV or a movie while teleworking, 35 percent had done household chores, and 28 percent had cooked dinner.

Galinsky, however, said that companies that believe work-at-home employees aren’t productive don’t have a location problem, they have a “management problem.” Even if employees perform household chores while working at home, she said, that’s not much different from taking workplace breaks to eat lunch, chat with a co-worker or take an energizing walk.

Performance systems can’t be “time-based, because some people can work very fast,” she said. “The quality of someone’s work is what we should look at and manage to.”

Hence, she said, a telecommuter’s productivity shouldn’t be measured by how much time they’re on the computer, but by whether they’re producing results. Managers need to set clear expectations for results, support teleworkers in achieving those results, and hold workers accountable for the results.

“By asking people to come in, [Yahoo’s] Mayer changed the expectation toward more productivity, but she could have also managed the people working remotely by demanding measurable results or telling them they’d lose their jobs,” Galinsky said.

As for the argument that face-to-face interactions with co-workers are necessary for collaboration, Galinsky pointed out that “you can have everyone in the office and have no collaboration … just people bumping into each other.”

“You need to create a culture of collaboration, which means that teams work together to solve their problems,” whether working at headquarters or at home.

Dana Wilkie is an online editor/manager for SHRM.