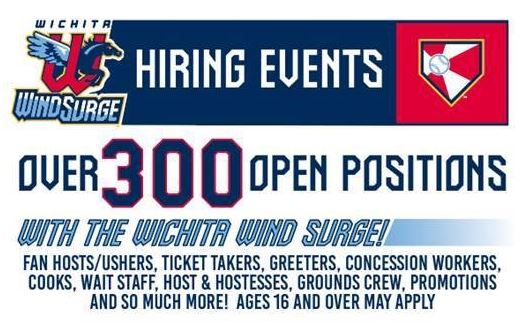 The Wichita Wind Surge needs to hire hundreds of workers ahead of its inaugural season. Syndeo is playing a role in getting those positions filled.

We are partnering with the team and the Workforce Alliance of South Central Kansas on two job fairs to fill an assortment of seasonal positions for the upcoming season, which starts in April.

The first job fair is from 3 to 6 p.m. Feb. 13 at that location. The second job fair will take place from 9 a.m. to noon (longer if necessary) Feb. 15, also at the Workforce Center.

A Triple-A affiliate of the Miami Marlins, the Wind Surge needs employees to fill more than 300 jobs including:

The creation of the Wind Surge brings Minor League Baseball back to Wichita for the first time since the Wichita Wranglers were relocated to Springdale, Ark. following the completion of the 2007 season. The Wichita Wingnuts, an independent team, followed the Wranglers and played from 2008 to 2018.

Team officials announced the Wind Surge name in November 2019 after months of speculation, a process that included rolling out a series of name suggestions to get and keep people in the community talking about the team.

The Wind Surge will play its home games in a new stadium that is being built on the site of the former Lawrence-Dumont Stadium on the western edge of downtown Wichita.