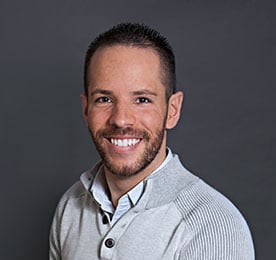 Owen Gomez has been promoted to the role of Director of Benefits for Syndeo.

As such, he becomes the seventh member of the company’s leadership team.

“Owen has dedicated his entire 11-year professional career to Syndeo and has earned this much deserved elevation,” Bill Maness, Syndeo’s CEO, wrote in an all-staff email announcing the change.

Gomez started with Syndeo as an intern in June 2009 while he completed his bachelor’s degree in accounting from Wichita State University. He spent his first eight years with Syndeo as a staff accountant before moving to the benefits department.

“This new opportunity means continued growth and challenge, which Syndeo has offered since day one,” Gomez says.  “These two things have helped mold me into a leader within the benefits department, and this new step will help me become a better leader for the company as a whole.”

Gomez says he can also draw on the industry experience of the other members of Syndeo’s leadership team.

He also served as a department representative on Syndeo’s Operations (Ops) Team, which is a liaison between the leadership team and the company’s departments.

Benefits Onboarding Specialist Krista Moren replaces Gomez as a member of the Ops Team. She has been with Syndeo since November 2015, starting in payroll and later moving to the benefits department.

These are examples of a desire from other company leaders to develop employees and allow them to grow within the organization.

“Syndeo has always viewed their employees as their most important asset,” Gomez says. “They have consistently made it a priority to promote and/or recruit from within before looking externally.”

Gomez is the third addition to Syndeo’s leadership team since early 2019. Kate Rhea moved from HR Business Partner to Director of Payroll in April 2019.